Ms Gong was invited to the UK to explain the benefits of the CHINA READY® Program and speak on “How to Service the Chinese Market”.

VisitBritain also took the opportunity to find out what CHINA READY is doing to look after the more than 1 million Chinese visitors expected to visit the Milan World Expo which runs from May to October this year. 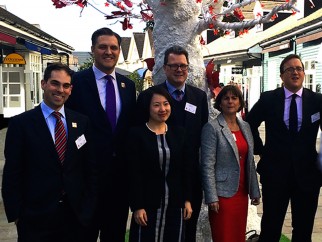 VisitBritain has introduced some clever initiatives in positioning their country and differentiating themselves in what has become a highly competitive global market for tourists, students and investment out of China. Over the last 3-4 years, more and more destinations around the world have become aware of the huge opportunity China provides.

One of the clever initiatives by VisitBritain has been a very successful competition where Chinese citizens provided a Chinese name to better describe various towns and cities in Britain.

“This was a very clever and thoughtful approach by VisitBritain,” commented Ms Gong. “It has generated significant attention, and coupled with renewed interest in the Royal Family and VisitBritain’s successful Paddington Bear promotion, awareness of the delights and experiences Britain has to offer is growing strongly”, she said.

“I congratulate VisitBritain and all those people who have worked so hard behind the scenes in making this campaign a success,” said Ms Gong. “I was amazed at the potential Britain has to capture a much larger share of China’s outbound market. There are so many hidden treasures that are completely unknown to Chinese people. CHINA READY looks forward to working with VisitBritain into the future”, concluded Ms Gong.

The special briefings were held across a wide range of regions in Britain including Bicester Village in Oxfordshire, Ascot Racecourse in Berkshire, Ritz Hotel in London, York Racecourse and Castle Howard in York and Clovelly Village in the far south west.